I’ll only marry you, if you… 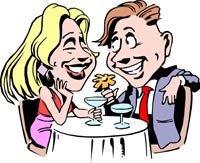 A secretary for a foreign embassy was entertaining a wealthy foreign ambassador during lunch at a very expensive restaurant in uptown New York. The ambassador was so enthralled by the beauty and presence of this secretary that he asked her to marry him. The secretary was startled, but remembered that her boss told her never to insult foreign dignitaries, so she decided to let him down easy.

„I’ll only marry you under three conditions.“ she said.
„Anything, anything,“ said the ambassador.
„First, you must buy me a 14-karat gold wedding band with a 72 carat diamond, along with a 28 inch studded matching necklace for our engagement.“
Without hesitation, the ambassador picked up his cellular phone, called his personal accountant, told him the instructions, and said, „Yes, yes, I buy, I buy!“

The secretary thought that her first request was too easy, so she thought of a more difficult situation.
„Second, I want you to build me a 58-acre mansion in the richest part of the Poconos along with a 40 acre summer home in the sweetest vineyards of France.“
The ambassador picked up his phone, called his personal broker in New York, then called another broker in France, and after his quick conversation, he said, „Yes, yes, I build, I build!“

The secretary was very startled, and knew she must think of a final request that would be impossible to live up to.
„Finally,“ she said. „I’ll only marry you, if you have a 10 inch tool.“
A sad face befell the ambassador, and he cupped his face in his hands. After weeping in his native language for a few minutes, the ambassador slowly lifted his head and said, „Ok, ok, I cut, I cut!“