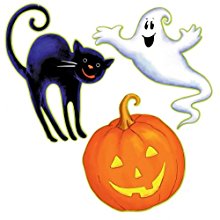 An extremely modest man was in the hospital for a series of tests, the last of which had left his system upset. Upon making several false-alarm trips to the bathroom he decided the latest was another and stayed put. He suddenly filled his bed with diarrhea and was embarrassed beyond his ability to remain rational. Losing his presence of mind, he jumped up, gathered up the bed sheets, and threw them out the hospital window.
A drunk was walking by the hospital when the sheets landed on him. He started yelling, cursing, and swinging his arms wildly, which left the soiled sheets in a tangled pile at his feet.
As the drunk stood there staring down at the sheets, a security guard who had watched the whole incident walked up and asked, „What the hell was that all about?“
Still staring down, the drunk replied: „I think I just beat the shit out of a ghost!“

––
A couple was going to a costume party. The husband was unsure of what costume to wear. His wife was telling him to hurry or they would be late for the party. She was walking down the stairs from the bedroom, completely naked except on her feet were a big old floppy pair of boots.
„Where is your costume?“ the husband asked.
„This is it,“ replied his wife.
„What the heck kind of costume is that?“ asked the husband.
„Why, I am going as Puss in Boots,“ explains the wife. „Now hurry and get your costume on.“
The husband went upstairs and was back in about two minutes. He also was completely naked except he had a rose vase slid over his penis.
„What the heck kind of costume is that?“ asked the wife.
„I am a fire alarm,“ he replied.
„A fire alarm?“ she repeated laughing.
„Yes,“ he replied. „In case of fire break the glass, pull twice and I come.“

––
A cabbie picks up a nun. She gets into the cab, and the cab driver won’t stop staring at her.
She asks him why is he staring and he replies, „I have a question to ask you but I don’t want to offend you.“
She answers, ‘My dear son, you cannot offend me. When you’re as old as I am and have been a nun a long as I have, you get a chance to see and hear just about everything. I’m sure that there’s nothing you could say or ask that I would find offensive.“
„Well, I’ve always had a fantasy to have a nun kiss me.“ She responds, „Well, let’s see what we can do about that: #1, you have to be single and #2 you must be Catholic.“
The cab driver is very excited and says, „Yes, I am single and I’m Catholic too!“
The nun says „OK, pull into the next alley.“
He does and the nun fulfills his fantasy. But when they get back on the road, the cab driver starts crying.
„My dear child, said the nun, why are you crying?“
„Forgive me sister, but I have sinned. I lied, I must confess, I’m married and I’m Jewish.“
The nun says, „That’s OK, my name is Kevin and I’m on my way to a Halloween party.“