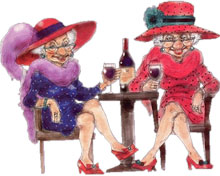 Two elderly ladies had been friends for many decades. Over the years,they had shared all kinds of activities and adventures. Lately, their activities had been limited to meeting a few times a week to play cards.
One day they were playing cards when one looked at the other and said, „Now don’t get mad at me .. I know we’ve been friends for a long time .but I just can’t think of your name! I’ve thought and thought, but I can’t remember it. Please tell me what your name is.“
Her friend glared at her. For at least three minutes she just stared and glared at her. Finally she said, „How soon do you need to know?“

––-
A woman arrived at the Gates of Heaven. While she was waiting for Saint Peter to greet her, she peeked through the gates. She saw a beautiful banquet table. Sitting all around were her parents and all the other people she had loved and who had died before her. They saw her and began calling greetings to her, „Hello, How are you? We’ve been waiting for you! Good to see you.“
When Saint Peter came by, the woman said to him, „This is such a wonderful place! How do I get in?“
„You have to spell a word,“ Saint Peter told her
„Which word?“ the woman asked.
„Love.“
The woman correctly spelled „Love“ and Saint Peter welcomed her into Heaven.
About a year later, Saint Peter came to the woman and asked her to watch the Gates of Heaven for him that day. While the woman was guarding the Gates of Heaven, her husband arrived.
„I’m surprised to see you,“ the woman said. „How have you been ?“
„Oh, I’ve been doing pretty well since you died,“ her husband told her. „I married the beautiful young nurse who took care of you while you were ill. And then I won the multi-state lottery. I sold the little house you and I lived in and bought a huge mansion. And, my wife and I traveled all around the world. We were on vacation in Cancun and I went water skiing today. I fell and hit my head, and here I am. What a bummer. How do I get in ?“
„You have to spell a word,“ the woman told him.
„Which word ?“ her husband asked.
„Czechoslovakia“, she says.