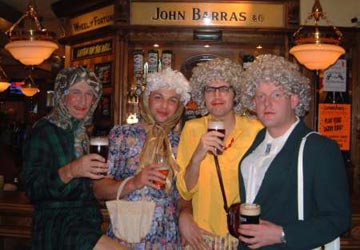 A couple is lying in bed.
The man says: „Right now, for this Women’s Day, I am going to make you the happiest woman in the world!“
The woman says: „Oh dear, I will miss you!“

––
When a woman says: „Well, what do you think?“, she is not asking for YOUR opinion. She is asking for HER opinion, but from your mouth.

––
While reading the newspaper, Walter came across an article about a beautiful actress and model who married a boxer who was not noted for his IQ.
„I’ll never understand,“ he said to his wife, „why the biggest jerks get the most attractive wives.“
His wife replied: „Thank you, dear!“

––
Husband: Shall we try a new positon tonight for Women’s Day?
Wife: Sure… You stand by the ironing board and I’ll sit on the couch and drink beer and fart!

––
When a man opens the door of his car for a woman, you can be sure of one thing: either the car is new or the woman.

––
Bob had been listening to his wife practicing her singing.
„Honey,“ he said, „I wish you’d sing the songs about Women’s Day.“
„That’s nice of you, Bob,“ she said. „Why?“
„Then I’d only have to hear you once a year!“

––
Seventy-five year old Marvin goes to the local mall and tries to find a gift for his wife for Women’s Day.
Upon passing a lingerie store, Marvin realizes that his wife has never bought any lingerie in her life. He gets the idea to buy his wife something sexy to make her feel good and young. Marvin goes into the store and tells the clerk to wrap up the most expensive, sheerest negligee she has. Marvin takes the gift and excitedly runs home to his wife. Upon finding her in the kitchen he tells her to take the gift upstairs and unwrap it. He’ll wait in the kitchen. His wife thanks him and goes up to the bedroom. Once the package is opened she realizes that this is something she’s never had before. She also sees that it is so sheer it leaves nothing to the imagination. She thinks for a moment and then decides that she’ll really surprise Marvin and go downstairs without any clothes on at all. So she leaves the negligee on the bed and starts down the stairs stark naked.
She calls out: „Marvin, come out to the hallway and look.“
Marvin walks out to the staircase, looks up at his wife, and exclaims: „All that money and they didn’t even iron it?!“