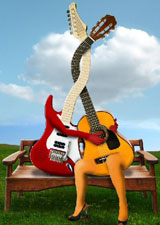 A couple were having marital problems. They decided together to do the right thing and they contacted a marriage guidance counsellor.
Several visits followed when lots of questions were asked and lots of listening carried out. Eventually the the counsellor felt that he had discovered the main problem. He stood up, went over to the women and asking her to stand up he gave her a huge cuddle.
He turned to the husband man and said, ‘This is what your wife needs, at least once every day.’
The husband frowned, considered what had been said for a moment, then replied, ‘Ok, what time do you want me to bring her back tomorrow?’

––
Jim asked his friend, Tony, whether he had bought his wife anything for Valentine’s Day.
‘Yes,’ came the answer from Tony who was a bit of a chauvinist, ‘I’ve bought her a belt and a bag.’
‘That was very kind of you,’ Jim added, ‘I hope she appreciated the thought.’
Tony smiled as he replied, ‘So do I, and hopefully the vacuum cleaner will work better now.’Funny Valentine Jokes

––
Roger, who was 19 years old, was buying an expensive bracelet, to surprise his girlfriend on Valentine’s Day, at a very smart jeweller’s shop in Hatton Garden, London.
The jeweller inquired, ‘Would you like your girlfriend’s name engraved on it?’
Roger thought for a moment, grinned, then answered, ‘No, instead engrave „To my one and only love“.’
The jeweller smiled and said, ‘Yes, sir; how very romantic of you.’
Roger retorted with a glint in his eye, ‘Not exactly romantic, but very practical. This way, if we break up, I can use it again.’

––
When a woman on the staff of the school where I worked became engaged, a friend and colleague offered her some advice.
‘The first ten years are the hardest.’
‘How long have you been married?’ she asked.
‘Ten years’, he replied.

––
Phil, a smart and handsome young man, dressed in the latest fashion, walked into this local pub. He noticed a woman gazing at him without blinking her big eyes. Phil felt flattered so he walked up to the woman and said in his deepest voice, ‘I’ll do anything you wish, beautiful lady, for just £10 but on one condition.’
The woman appeared to be trapped in the moment and asked as if in a trance, ‘What’s your condition?’
Phil answered, ‘Tell me your wish in just three words.’
There was a long pause, the woman opened her purse, counted out the money and handed it to the man along with her address. She then looked deeply into his eyes and whispered, ‘Clean my house.’