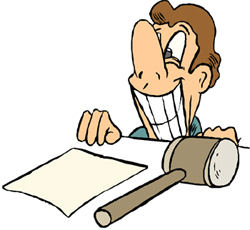 These were supposedly published by the Massachusetts Bar Association’s Lawyers Journal, listing them as questions actually asked of witnesses by attorneys during trials and, in certain cases, the responses given by insightful witnesses.

1. Now doctor, isn’t it true that when a person dies in his sleep, he doesn’t know about it until the next morning?

2. The youngest son, the twenty-year-old, how old is he?

3. Were you present when your picture was taken?

4. Were you alone or by yourself?

5. Was it you or your younger brother who was killed in the war?

7. How far apart were the vehicles at the time of the collision?

8. You were there until the time you left, is that true?

9. How many times have you committed suicide?

10. So the date of conception (of the baby) was August 8th?
Yes.
And what were you doing at that time?

11. She had three children, right?
Yes.
How many were boys?
None.
Were there any girls?

12. You say the stairs went down to the basement?
Yes.
And these stairs, did they go up also?

13. Mr. Slatery, you went on a rather elaborate honeymoon, didn’t you?
I went to Europe, Sir.
And you took your new wife?

14. How was your first marriage terminated?
By death.
And by whose death was it terminated?

15. Can you describe the individual?
He was about medium height and had a beard.
Was this a male, or a female?

16. Is your appearance here this morning pursuant to a deposition notice which I sent to your attorney?
No, this is how I dress when I go to work.

18. All your responses must be oral, OK? What school did you go to?
Oral.

19. Do you recall the time that you examined the body?
The autopsy started around 8:30 p.m.
And Mr. Dennington was dead at the time?
No, you dummy, he was sitting on the table wondering why I was doing an autopsy.

20. You were not shot in the fracas?
No, I was shot midway between the fracas and the navel.

21. Are you qualified to give a urine sample?
I have been since early childhood.