Have a laugh at our expense 3 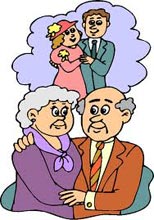 A senior couple are both having problems remembering things. During a checkup, the doctor tells them that they’re physically okay, but they might want to start writing things down to help them remember…
Later that night, while watching TV, the old man gets up from his chair. ‘Want anything while I’m in the kitchen?’ he asks.
‘Will you get me a bowl of ice cream?’
‘Sure..’
‘Don’t you think you should write it down so you can remember it?’ she suggests. ‘No, I can remember it.’
‘Well, I’d like some strawberries on top, too. Maybe you should write it down, so not to forget it?’
He says, ‘I can remember that. You want a bowl of ice cream w​i​t​h​ s​t​r​a​w​b​e​r​r​i​e​s​.​
‘I’d also like whipped cream. I’m certain you’ll forget that, write it down?’ she adds.
Irritated, he says, ‘I don’t need to write it down, I can remember it! Ice cream with strawberries and whipped cream – I got it, for goodness sake!’
Then he toddles into the kitchen. After about 20 minutes, The old man returns from the kitchen and hands his wife a plate of bacon and e​g​g​s​.​.​.​ She stares at the plate for a moment. ‘Where’s my toast?’

––
Three sisters, ages 92, 94 and 96, live in a house together. One night the 96-year-old draws a bath. She puts her foot in and pauses. She yells to the two other sisters downstairs, „Was I getting in or out of the bath?“
The 94-year-old yells back, „I don’t know. I’ll come up and see.“ She starts up the stairs and pauses „Was I going up the stairs or down?“
The 92-year-old is sitting in the living room having tea, listening to her sisters, she shakes her head and says, „I sure hope I never get that forgetful, knock on wood.“ at the same time thumping her walking stick on the wooden floor. She then yells, „I’ll come up and help both of you as soon as I see who’s at the door.“

––
A group of elderly friends had dinner at another couple’s house, and after eating, the ladies left the table and went into the kitchen.
The two gentlemen were talking, and one said, ‘Last night we went out to a new restaurant and it was really great.. I would recommend it very highly.’
The other man said, ‘What is the name of the restaurant?’
The first man thought and thought and finally said, ‘What is the name of that flower you give to someone you love?… you know, the one that’s red and has thorns.’
‘Do you mean a rose?’
‘Yes, that’s the one,’ replied the man. He then turned towards the kitchen and yelled, ‘Rose, what’s the name of that restaurant we went to last night?’